Lover of indie/small-scale games. For some reason AAA games just don’t attract me as much with their scale/message/target audience.

I’ve somehow taken on the role of both the Producer and Designer in my team this time, but my primary interest is still in designing games. I want to make games that convey a message, let players experience a point-of-view that they have never thought about, and let unheard voices be heard. Not sure how possible this dream of mine is, but for now I’m going to be working hard towards it.

I also have other hobbies like singing and dancing though I kinda suck at both. T_T

Fun Fact: My blood probably consists of 50% tehbing. It keeps me alive…

As the team’s resident boardgame enthusiast, I’m enjoying the challenge of adapting my designs for digital games. After GIP I plan to craft and eventually publish small-run board games. But for now I’m just happy to be out of my comfort zone, experimenting in a new medium and gaining new perspectives.

One of my guiltiest pleasures is trawling through Kickstarter – much to my budget’s chagrin.

I’m not too sure what I did but I think I may have accidentally made a game.

I mainly handle the UI/UX programming, which I find very enjoyable.

I am mainly in charge of the front end of the development. My work scope ranges from fx creation, animation, boss AI, sounds editing to idea generation.

I am constantly trying to find things that satisfy me. One of them is to programming day and night, but that failed me (of course you might think). That might be why I normally ended up doing analysis, wearing multiple hats and watching tutorials(which usually cause me to miss my bedtime when motivation strikes in).

p.s.  I have found my favourite food but still searching for a favourite drink.

Waddup y’all the name’s Jon Michael and I am going to sell my soul to the devil (read: Going to study Computer Science in Game Design in Digipen).

As one of the team’s programmers, I was mainly in-charged on implementing the turn-based/combat system of A Hunter’s Tale as well as it’s system architecture. I have been teaching myself programming since 2012, with games as my primary focus. Though my obsession with game-dev has lead me to wear silly hats from time to time, my ultimate goal is to become a indie game developer and publish my own games; not an easy endeavour I know… but I’m working on it. 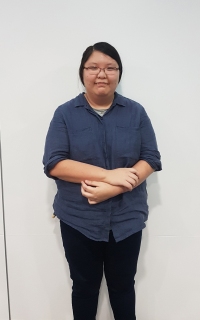 I handle mostly the animation (WOOHOOO) and UI of the game. Through this project, I’ve learned how to get more efficient in my craft – what used to take me roughly 25 frames to animate previously now only takes me 8.

I am Gin, a self-taught hobbyist artist who is finishing the Master program of Architecture in NUS.

I draw to distress whenever I get screwed by my university course.

I used to be stuck in fan-art illustration.

I am currently struggling to get my way into a concept artist.

I wish I could make it before my next life.

People call me creepy old man. I don’t know why. Someone please enlighten me.

Rafid is my name and Street Fighter V is my game.

I’m currently a Year 3 student from Singapore Management University, majoring in Information Systems with a second major in Corporate Communications.

When I’m not finding bugs and working on sound/audio, you can find me battling digimon with Ivan (from Binary Pudding Studios) and playing Street Fighter V.

Looking forward to working with more game studios and companies in the future as a QA! So far, the hair on my head is all intact so that’s good.

Add ‘fishcake’ on SFV if you want to fight me! I’m a noob I promise.